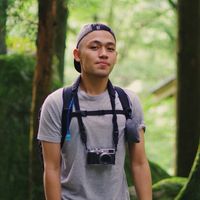 Third culture kid, yours truly! I'm originally from Malaysia and have been moving around the world since I was little. Previously lived and studied in Japan, currently back in Malaysia again after more than a decade of living abroad.

Like many people on this site, I'm here because I enjoy the simple pleasures that come when you meet new people and share your life stories with each other. I've learned so many things from fellow Couchsurfers I've met and hosted, especially on how to be a traveler and not (just) a tourist. I do believe that there's a difference between the two. I've always felt that there's more to traveling than following my own itinerary of what I think there is to do and see, especially in a place I've never been to before.

I'm not in any way belittling the importance of making plans: I'm simply acknowledging that plans can only get me so far before I have to go out on a limb to find my own adventure.

For me, traveling at its most ideal is both an expressive and meditative act: it puts me in a state of wanting more meaningful experiences out of my life, but it also stops me from rushing to experience something just so I can move onto the next thing, and the next, and the next, all the while missing out on the present. I've enjoyed my travels far more when I did less of what my ego demanded; when I wasn't looking to be entertained with my modern comforts, but instead to look for experiences that put me on the growing edges of my comfort zones.

It's kinda hard to put these things into words so publicly on here since they're so precious to me and have transformed me inside-out. I've been truly blessed to have had a few of these moments in my life, and more blessed to have felt real joy over them.

But beyond joy, adventure, and experience, I'm also here to learn how to be kind and hospitable towards people beyond my own line of sight, in return for the incredible kindness and hospitality that many beloved strangers have extended towards me in my own life when I least expected it.

Music: It's always difficult to choose a favorite. I'm always looking to be introduced to new music, but my all-time favorite music act is decidedly A Tribe Called Quest. But I occasionally listen to stuff like electro, r&amp;b, and other indie acts – Toro y Moi, Tycho, Tame Impala, Fleet Foxes, alt-J, Tallest Man on Earth, Low Roar, Edward Sharpe, to name a few. I'm also really partial to Okinawan folk music and West African blues, despite not being able to understand their lyrics. And I'm just starting to get into jazz after being properly introduced to the genius minds of Miles Davis and Bill Evans.

Books: I grew up wanting to only read The Lord of the Rings over and over again. Nowadays, I'm mostly inclined towards biographies and books on educational thought. Malcolm X's Autobiography was a profound reading experience. Right now, I'm working my way through Robert Caro's four-vol. biography of Lyndon Johnson.

I can clean and cook, and love doing both (serious). Being the budget traveler that I am, I always carry a little box of herbs &amp; spices whenever I travel just so I can do some simple, spontaneous cooking. I can definitely fix up something for you if you'd like. I can play some simple tunes from Okinawa if you'd like to hear some. I also taught English to schoolchildren for a couple of years — naturally, I'd be than happy to hear you practice your English if you'd like to do it with an attentive conversation partner :)