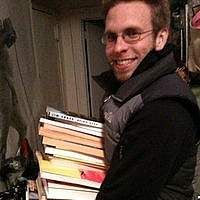 Always planning the next adventure.

Here's a video of my trip from Denmark to Russia, summer of 2010: http://www.youtube.com/watch?v=gS6iUwpG5fo

"...centuries from now our great-great-great-grandchildren will look back at us with amazement at how we could allow such a precious achievement of human culture as the telling of a story to be shattered into smithereens by commercials, the same amazement we feel today when we look at our ancestors for whom slavery, capital punishment, burning of witches, and the inquisition were acceptable everyday events." -- Werner Herzog

I've stayed with a bunch of people across Scandinavia, Russia, and Morocco, etc. I've also hosted about a dozen great people while living in Morocco, and a few in Cairo. Now I'm back in the US, but still traveling the globe whenever possible.

Libraries and literature, food, beer, photography, other peoples' stories, living simply and cheaply, being as free as possible until the moment I die

I've been way above the Arctic Circle. (update: three times!)