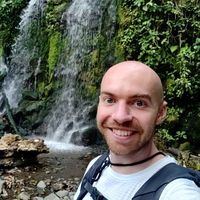 Help strengthen community cohesion and help people feel empowered to achieve their goals. I do this through a non-profit I started.

I like to do daft things, which in the past have included appearing on a TV gameshow, breaking a Guinness World Record, running marathons, hitchhiking 3000km.

I'm an ambitious chap. I quit (what used to be) my dream job to start my own company, which helps others achieve their goals and brings society together.

All of my CS experiences without exception have been memorable in a very positive way.

Music - Particularly rock, but also some classical and anything talented. Some of my fave bands are:

Books: Not a voracious reader of books (wish I'd find more time), but I normally plump non-fiction. Love the neuroscience books 'Chimp Paradox' and 'Incognito'). Currently engrossed in the final book of the Millennium trilogy.

Films - Name a famous film and I probably haven't seen it.

Volunteering on the island of Lesvos to support refugees. Despite the misery and injustice, it was a strangely uplifting experience because of the inspiring people I was surrounded by and making an impact with. I'll be heading back to Greece in Oct '19.