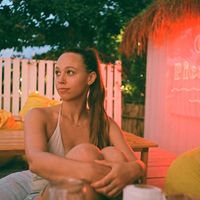 PLEASE READ BEFORE YOU MESSAGE ME:
I am not here to be flirted with, or to be offered tour packages. I am traveling to make deep connections with others that will leave me with hope for humanity.

IF YOU WRITE TO ME AND JUST SAY “Hi” I WILL NOT REPLY.

I'm a yogi, artist, curator, musician, story teller and many other things. I can offer music, cooking, and yoga classes in exchange for a place to stay.

I'm on couchsurfing because I love to travel (unfortunately can only afford it so much, I'm as most people are: on a budget 24/7) and see places through the eyes of those who live their lives there.

My interests stem from the relationships I enjoyed during childhood. I can trace back the root of each of my passions to the moment someone encouraged, showed, or taught me. I hope to spark the same joy in others by opening their eyes to things they have perhaps not experienced yet.

Hiked through snow covered mountains in a storm to a geothermal river in Iceland, hitch-hiked through some South African countries, visited a lion farm in Botswana, drove the Ha Giang loop of Northern Vietnam, dove with manta and whale sharks in the Similan Islands, surfed in Siargao, got chased by an elephant in Zambia, visited a quinoa factory in Peru, swam with stingless jellyfish in Sohoton, crashed a motorbike in Saigon..there are so many moments of my life for which I could tell stories endlessly.

(I don't believe in having just one Favorite)

I love learning languages. If you speak German, French, Spanish, or Tagalog we can practice together.

I can teach you some guitar, yoga (asana, light philosophy, pranayama), or explain the contemporary art world to you. Can also teach you some basic concepts about diving.