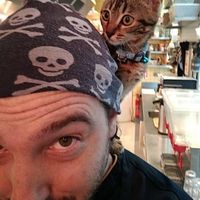 I'm reactivating my account.
Everything changed in CS: my profile is old-school.
I'm not really using this website anymore, I keep it just in case this is your only way to contact me (for example, you're an old guest or host of mine and you want to keep in touch).

I took a break from Couchsurfing.
Now I'm reactivating my account, but I don't think I'll be really active.
I use other HospEx networks, where I have the same username (Aida82)m except for TrustRoots, where I am GingerManu.

I started with HospitalityClub, and after one year joined CouchSurfing too. My first CS experience (even if I wasn't a CS member yet) was a month long trip in central/eastern Europe in august/september 2005: it was my very first experience with hospitality networks,
Then it became a good habit.

Between 2008 and 2009, with the Big Pink House and the Permanent Hospitality Berlin (BPH&amp;PHB), I had a massive hosting experience.

I couchsurfed around Europe.

I stopped using Couchsurfing in 2013.