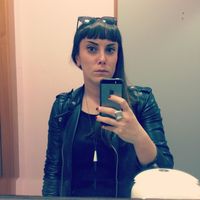 Gain back time to go swimming

Snakes lover, chips addicted, bike rider, team Lannister in Game of Thrones.
I hate hiking and camping but I'm working on that.

I like traveling by myself ands meeting other local surfers who can show me around hidden places and secret spots where to eat cheap and great food.

At the moment I'm interested in discovering Eastern Europe.

I love architecture, mostly cheap houses, brutal soviet stuff and hive buildings. Not much into archistar and steel/glass high tech, since I've had enough while I was at university.

Three weeks solo-bus-backpack-trip though the northern Balkans, actually I spent a very short time by myself but that was the most adventurous thing I've done so far.

I love cooking for other people and have long bike rides.

I can't park my car properly so I'm always picking up suggestions.

Once I taught a romanian guy all the italian gestures and he still remembers so I can give you private lessons for free.