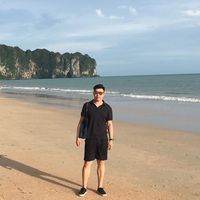 I don’t really know how I should write here. I’m Chinese from the north east. But definitely not a certain type that people don’t like. lol ( I guess we all know that certain stereotype ) I’m open/western minded , down to earth, respectable, and Britain educated.

I have 2 dogs, a mut and a German Shepherd. They are lovely dogs and very friendly.

I travel a lot, and most of the time, I travel alone. I like seeing nature. Spending time at the beach, go diving, and safari in the jungle. And I love meeting new people from different places. I love learning new culture.

I’ve been to over 80 countries by far. And the number is still adding. So I can share my travel stories with surfers.

It’s a great way to meet people from all over the world, make friends, learn a bit of their languages and culture.

Caught a bamboo snake in Hongkong

I can show you around town, we can cook together at night, hang out.