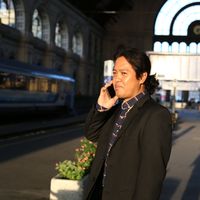 PLEASE READ FIRST "MY HOME" DESCRIPTION BEFORE SENDING COUCH REQUEST. If you don't include the "password" on your couch request, I will decline your request automatically.

Straightforward, Kind and open minded. Open to changes and critical thinker. Currently I am a PhD Student in Budapest, Hungary and formerly based in Davao City, Philippines. Being somewhat "deprived" of travelling when I was young, it was only in 2012 that I started to travel. Mostly the motives of my travel are for academic purposes as my work doesn't allow me to splurge. Also love to help others if they are in need like for example if they want to integrate closely to Philippine culture etc. Been doing photography since 2008, I got passion especially in Photojournalism and Street Photography because it allows you to think outside the box and step out from comfort zones. Hope to meet people who share my interest in travel and learning diverse cultures. :)

Carpe Diem! Seize the day. Live life to the fullest. Be responsible to own actions

PLEASE READ FIRST "MY HOME" DESCRIPTION BEFORE SENDING COUCH REQUEST. If you don't include the "password" on your couch request, I will decline your request automatically.

I can find better places to stay or spend company with. Teach the ins and outs of Philippine Culture. Cook some dishes. Collaborate with possible research opportunities,

Being in Berlin, Germany first time outside of the Philippines
Being in Romania, explored Bucuresti, Iasi, and presented my research paper in Constanta. :)
Traveled for 22 days in Northern and Central Europe (December, 2015)
Being a pioneer Filipino PhD student of my university here in Budapest, Hungary

I can teach the following:

A good place to sleep, guide you in basic spots in Budapest, Play vinyl records in the flat. Cook fusion of EU and Asian dishes.