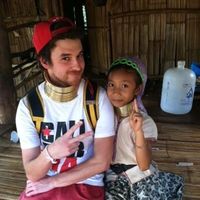 I grew up in the midwest of the USA, but by the time I was done with high school I wanted to get away and try some new, so I headed to college in the south. While there I decided to study abroad, having had the vague notion that that was something you should do in while at university. So I headed to Europe for (what I thought would be) a semester; it was my first time outside of North America.

That experience changed my life. I liked it so much that I extended my time abroad for the full year, and I have been traveling as much as I can every since. I've now been to almost 50 countries across 5 continents, with hopefully many more to come. The people I've met and places I've seen have created some incredible memories and changed my perspective on life, and I'll always be glad I decided to give it a try.
Love seeing new places and doing new things.

My profile here is still new, so if you want to see more pictures on IG or my 70+ reviews from Airbnb hosts, I've included links to those profiles below:

As a solo traveler, it can be hard at times to go beyond the typical tourist destinations or to get to know the local people. Things like pub crawls can help, but I'm hoping Couchsurfing provides another avenue to become connected to like-minded people in cities around the world. There are plenty of times I find myself wishing there were a way to find these people without some sort of large event going on, so I think the meetup options here are an awesome option for that.

Why join now? I've always used Airbnb, but their service fees have gone up a lot in recent years and it's no longer a good value. Moreover, many of the properties are now professionally managed and lack the personal touch that they initially had. And I don't want to sit alone in a hotel! So after learning a bit more about it and hearing good things from my friends, I decided to give CS a try.

Hard to pick just one! But riding an elephant in Thailand, trying out an Olympic bobsled track in Norway, petting kangaroos in Australia, and climbing to the top of a mountain for an amazing view of Rio de Janeiro are some that come to mind first.

Learn: I always like to hear about about cultural norms and how they differ around the world.

Share: I love just grabbing drinks to talk and get to know people with interesting backgrounds.

I'm happy to share almost anything, but I would especially love to swap travel experiences/preferences with other members of the community!