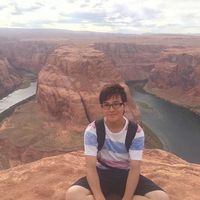 I am a Japanese student in France. I speak English and French and of course Japanese. I have to go back to Japan in this June, so I travel in some countries now. I would like to have great friends and memories with you.
I study the education in Japan and I hope to speech my memories to my future students someday.

I write my reason on my profile.

the culture, people, food in your city or country

I like Got7, who is a k-pop group. Ghibli, which is a anime movie company mainly ran by Hayao Miyazaki.
I like some japanese animes.

When I was traveling in Germany, I happened to meet Merkel, the President of Germany.
The day before, I took a bus from Mannheim for France, but we were forced to get off the bus in Freibourg because of a crazy bus driver. Fortunately, a guy who had just becomes my friend helped me and I stayed his house. The next day, we walked around and visited the town. The day was during the election of the president. When we were walking, a black car which was surrounded by police cars stopped in front of us. Then she appeared. I screamed “ What a coincidence!!”
That’s the strangest adventure in my life.

I hope to see you and I am looking forward to talking about a lot of things, your favorites, our daily lives, difference between your country and Japan, love, etc.
Thank you!