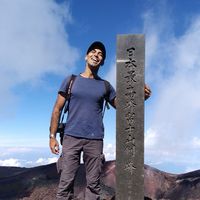 PHILOSOPHY
"La vita non va allungata, va allargata" = "Life is not to be extended, it's to be enlarged". In Italian "Life" = "Vita" = "Waistline"!

+++ UPDATE 2022 +++
I'm very upset with this website because in the middle of a pandemic, it decided to set up a paywall preventing people from getting in touch with their CS friends or even accessing their own profiles!

So I'm now on BeWelcome: https://www.bewelcome.org/members/Alb-erto

I've been meeting wonderful people around Europe, middle east, southeast Asia, Africa and Australia. This website has raised my trust in mankind.

I ain't exactly a night owl and i'm quite not into drinking so if you're looking for a party guy i'm not your man. I enjoy doing sports and outdoorsy stuff. Around Bologna there are places i know quite well and places i love. If you're looking for good food i got some advice to give! :)

Rock'n'Roll and Musicals/Opera - Documentaries and Tarantino - Essays and Travel guides!

Interviewing a sorcerer on how to cure diarrhea.

Flying on a balloon. Ending up in a river.

Supplì and sfogliatelle near a minefield.

Driving around playing loud illegal rock music in the Islamic Republic of Iran.

Tea with a bunch of hunters in the middle of a sub-equatorial jungle.

I'm not a great cook but i can definitely share some good italian recipes. I know it's a cliché but i love spaghetti!

Moreover i've just learned how to count to 10 in Chinese using one hand! But i actually don't know for how long i'm gonna remember this stuff.. :)

Well, I got a sh*% load of knowledge to share about my country!

Like:
1. Spaghetti bolognese ain't no real thang! In Bologna you're supposed to order "tagliatelle al ragù"!
2. Real sicilian sweets (cannoli, granita, etc.) are rare commodities outside Sicily. Don't be fooled!
3. In Italy we have a simple hand motion to say WTF!