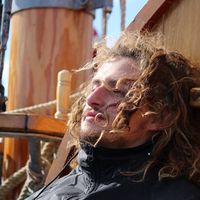 Living in Myvatn at the moment in a relatively remote mountain refuge.

Generally I won't accept requests too far in advance as I generally will not know what I will be doing at that time.

Happy to host people and there are mattreses and plenty of space at the bottom and top (where I sleep) of the refuge. But ability and wilingness to hitchhike or a car is a must.

Also, I have no toilet (it is in a wee house outside the main area) and no shower (there is an open free shower a bit down the road, yes, outdoors, yes, in Iceland, and yes, it is amazing). But there is a river with water around 40 degrees running around 100 meters from my place, so...
And if you are into skiing, I live by a ski lift, so if you come in the right season we can always do some skiing.

Also, I have no issue with what kind of lifestyle you lead, but my house is dead animal free (except the ocasional fly that dies after coming in).

I've played rugby and basketball for a long time. And now I'm into kayaking climbing and sailing...

While in Iceland 7 years ago, I ended up sailing to Greenland after working in the schooner Opal. Now, many years later, after COVID hit, I decided to try again in Iceland and it has welcomed me greatly.
Now I am studying my captain license, finishing my Masters in Environmental Law and also teaching skiing and climbing in a local sports club in Myvatn while running the sports center and living here in the mountains.

I am very interested in Climate Justice, Local and international management of protection of biodiversity and in labor law, sindicalism and general labor rights.

I am slightly bad at following common conventions and I am very direct and genuine, which can be either good or bad

The goal in life, at least for me is get to understand the meaning of freedom, and happiness, and a pursue of the present moment is key. Equanimity and inner peace is my goal.

Besides, the pursuit of happiness is really scary but you only have to take the step and then make the effort to reach it. And this can only be done by internal search, therapy and taking care of oneself.

Because of the same reason many others are, traveling is beautiful and meeting people from around the world goes with it.

I want to know the word Butterfly in all the languages that my brain can't stand, looking for one as good as Pimpilipauxa. (basque) or Parvané (Farsi)

Understanding will lead to peace, so to be able to understand other people and other cultures you gotta travel the world and host people from all over the world!

I also want to meet people and know their stories, everyone is defined by the stories that that person has lived. I love listening to different stories and different backgrounds,

Big weakness here, where all my ideology tends to bend a bit, as I love Disney movies, Harry Potter, Star Wars, superhero movies in general... Big LOTR geek, and proud!

Also happy with movies with big social comentary, anything really.

From rom coms to heavy documentaries, if it has a good soundtrack I am happy to talk about it and watch it. That is why I have a proyector at home.

I am not much of a reader I'll admit, but I do listen to books, and that fits more my vibe I think.

Started Gestalt therapy in January 2021 and never going back.

I am not sure, you can probably figure that out when we meet.

I love teaching, but my main objective right now is to learn... And the goal is to become a great educator.

I guess I can teach you some nice sailing knots and splices, some basics on mushroom growing, basketball, and some other random things...

I am a rock climbing instructor, so can always take anyone out for a wee introductory session or just a stroll in the countryside/mountainside.

I can share some random totally useless phrases in Spanish that I personally consider amazing and beautiful but they will be of little use to you in your journey to learn the language. Or some useful ones I guess...

I am stupidly busy, so I will try my best to spend time with you but I usually have studies, meetings or sailing stuff going on... Which means I can still cook for you, recommend you places and all and maybe even go with you, but you have to be independent and flexible with times!