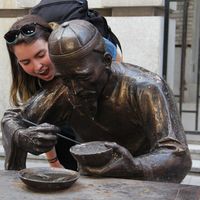 I'm a marketer by profession and a linguaphile by passion. I believe in karma and naively trust people.
I love travelling, but not as a tourist. For the past 6 years I've been moving from country to country to live with locals and learn their languages.

Couchsurfing introduced me to a bunch of amazing people I wouldn't have met otherwise. With one of them I drove around Iceland. With another one I biked around Okinawa. With yet another one I hiked Via Algarviana in South Portugal. And with all of them I started a long lasting friendship. It's a great community that keeps my faith in humanity alive and I'm proud to be a part of it.

- studying new languages and watching Desperate Housewives in them,
- having life outside Facebook,
- going to museums of modern art,
- being able to fit my whole life into a backpack,
- feeling lucky,
- being recommended good books,
- pretending that life has a meaning,
- losing my mind on techno festivals,
- recognizing constellations,
- using the 5:5 rule - if it won't matter in 5 years, don't worry about it for more than 5 minutes :)

Fight Club, Into the Wild, Almodovar, Haruki Murakami, distopian books, Carol, all kinds of techno, and many, many more

I diagnozed myself with wanderlust when I was 18.