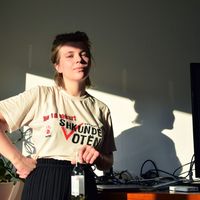 Can come off as very standoffish, but I'm just shy.

Bachelor's student hoping to tie my future with working in some kind of cultural institution. Or something. We'll see!

I like some good old-fashioned internet referential humor, it helps me cope with the fact that most of my university work now revolves around trauma studies and Eastern Europe's merry history :~)

The Age of Innocence, Stanisław Barańczak (...)

Local history is one of the better parts of traveling. Tell me about your city's buildings or streets. I'll write about it all someday.

I know little to nothing, but I can try.

I can help you around your house (walk your dog? make coffee?), I can lend you a t-shirt. And I like listening to people's stories.