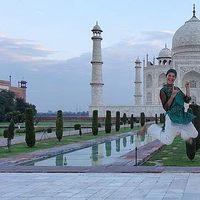 We are a friendly couple who plan to do a world tour during one year : about 18 country in all!

We met each other during high school and are together since 9 years... we plan to celebrate 10 years of couple in Easter Island!

After healing of Alex's Leukemia, we would like to enjoy life! It was our dream before Alex's disease... now we can do it!

The world tour is the opportunity for both to discover the lives of the local population. Indeed we want to be close to people in order to learn about customs, languages, gastronomy and so on! So this experience is a great human experience that allow us to share, exchange and live moment together!

We will be glad to help you to give a hand for cooking (Alex) or baby-sit (Barbara).

During one year, Alex went in England in order to study and lived in multicultural house with people from abroad: portugal, poland, china, spain, angola, russia and so on!
Moreover Alex when he was child (12 to 16 years old), went several times in Bournemouth for language courses and was welcomed by english host family.

housemates from around the world (Portuguese, polish,chinese, korean, japenese, spanish . So he is used to live with others

Life and world still have a lot o show us!

&gt; Barbara : resign from my job in order to do the world tour!

&gt;Alex : Since 3 years I'm out of leukemia (cancer of blood)... so I lived with an other way of life that's why we do a world tour.
&gt;Both : To be always together (9 years) after Alex test and want to enjoy life.

The simple act of teaching is a learning;)
The aim of world tour is to learn a lot about the others, customs, languages and strengthen humility!

&gt; Barbara :
I'm a nurse and specialized for childcare. I Manage 18 people and 51 child everyday of life. So I could give some advice about management and give a hand for healthcare.

&gt; Alex:
I could teach Kendo (sports). As consultant on project management, I can give a hand to build, prepare and realize projects (social, sustainable development, IT).