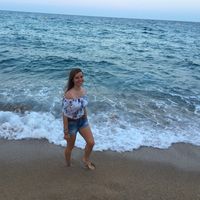 The most important thing: I'm always smiling and seeing life from the positive side! I am a little bit shy at first but if you're welcoming and open I will be too. :D Other than that, I am a primary teacher and an airport agent. And I think I don't have to tell you fellow couchsurfers that I love travelling, otherwise I wouldn't be here!

In my gap year I learned to appreciate friendships with people from other cultures, other countries and with other languages.
It was the best year of my life!
Since then I can't have enough of this internationality. Nothing makes me feel more excited than talking to my friends from all over the world, and making plans to meet again.

I love to dance, especially to Latin music such as Bachata and Salsa, I also love to sing along.
Even though there‘s nothing like laying on the beach and enjoying myself (which I also need sometimes), after some days I‘m always bored and craving some action, like hiking up a mountain or going out and meeting new people while sipping on a Caipirinha!

Films: Inception, Shutter Island, Matrix, all Fast &amp; Furious, Fack Ju Göthe, ...... I also like horror films, comedies and dramas, obviously it depends on my mood what I want to watch.

Books: 50 shades of grey, Three minutes with reality, ...
When I read a book, I don't usually remember the titles, and I honestly prefer to watch movies than to read, but I'm trying to read more.

The moment when I realised that I have to appreciate every moment in my life and be thankful for the things I have and for being born in my country.

Plus, I saw wild monkeys and parrots in Ecuador which was so cool! (I can be amazed by simple things)

Most recent "most amazing thing I've done": I hiked/climed Pedra da Gávea in Rio de Janeiro! And I’d have to add here so many more things that happened on my last trip (6 months through Latin America) but I think Pedra da Gávea is still my favourite

Both of us could improve our language skills, I could try to teach you some (Swiss) German. I'm interested in other cultures, other religions, how your life in your country is different to mine, so we can both learn a lot about our world :)

We can cook together, go out together, do a city tour or go shopping, meet each other's friends, or just share a relaxing movie night following some deep conversations. There are no limits. Except that I wouldn't go bungee jumping. ;)