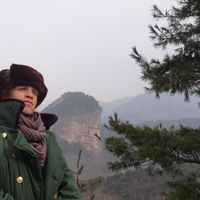 I’m getting old and I enjoy it! When I was in my teenage years and in my early 20’s, I wanted to be an epic Russian writer or a 19th century sailor writing about Hong Kong’s brothels and opium dens in his to-be-published-after-his-death diary. I also considered founding my own state. Unfortunately, I failed all of those objectives miserably.

Now, I just aspire to become some kind of Buddhist monk or a wandering Yogi in a fairly distant future. I mostly dedicate my life to become less ignorant every day and I try to replace partying until 7am with meditation and yoga. Life ain’t bad, can’t complain!

Since you’re here, there is this joke I got from talking to random people on the streets in India: “What were the dying dogs wandering the streets in their previous life?” Figure it out and gimme your best guess when we meet!

The world would be a better place if everyone read Rumi. There you go ;)

This being human is a guest house.
Every morning a new arrival.

A joy, a depression, a meanness,
some momentary awareness comes
as an unexpected visitor.

Welcome and entertain them all!
Even if they are a crowd of sorrows,
who violently sweep your house
empty of its furniture,
still, treat each guest honorably.
He may be clearing you out
for some new delight.

The dark thought, the shame, the malice.
meet them at the door laughing and invite them in.

Be grateful for whatever comes.
because each has been sent
as a guide from beyond.

Facing the horizon in remote and deserted places like the Himalayas. A fine way to grasp the concept of vacuity and realize how absurd modern life can be!

Appart from that, I also enjoy:

Not a big fan of commercial stuff, I enjoy when a person leaves a part of his soul in his art. I'm always up for any good independent movie, be it Mexican, Chinese, Russian, Romanian, Québécois, German… The Chinese Farewell My Concubine, the Turkish-German The Edge of Heaven, the Russian Leviathan, The Québécois Incendies, the Mexican El Infierno are all masterpieces.

Unfortunately, these last years I spent my time reading thousands of pages of academic stuff. Interesting but a little bland at times. I have something for Russian literature. Dostoievsky is an absolute master, Gogol, Turgeniev, Tolstoy, Solzhenitsyn are great! French Classics are nice especially the wicked ones like Baudelaire, Rimbaud, Huysman, Céline. Although Malraux and Cendrars aren’t very fucked up, they’re cool too! Those dirty and dusty American writers such as Kerouac, Bukowski, Fante are nice. Good old US writers like Hemingway or Steinbeck are very nice too. I enjoy Kafka and Taoist philosophers such as Laozi and Zhuangzi. I also enjoy Western philosophy but I sometimes think that some authors would gain some wisdom from conducting comparative research on Western and Eastern philosophy. These days I wanna learn more about South Asian philosophy, chakras and meditation so I’ll do that after I’m done with my academic stuff!

About music, here are two quotes of Confucius that sum it up pretty well
“Music produces a kind of pleasure which human nature cannot do without.”
“If one should desire to know whether a kingdom is well governed, if its morals are good or bad, the quality of its music will furnish the answer.”

Plus I have something for Dead Can Dance

I can listen and talk

Have a beer, have a tea

Teach you a few tricks to survive the slums in Latin America, to survive the winter in Canada or to understand China so you don’t end up being a depressed, frustrated and alcoholic expat (China is full of them!)

I'll probably be smiling! It is not that common in some countries!