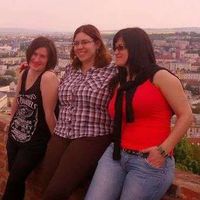 Born and raised in the UK, I spent many years living in Central Europe before becoming a digital nomad and travelling around Asia and Europe. I've now been back in the UK for about a year but am about to leave again.

I would say I'm pretty sociable, I like hanging out in pubs and putting the world to rights (not so keen on clubs and fancy bars though; I'm a casual pub sort of person); however, I also like solitude sometimes (I am a writer, so goes with the territory), so I try to balance the two.

I love travelling and being on the road is the only time I actually feel fully comfortable in myself. I also love writing, having worked as a journalist and am currently working as a freelance travel writer. Other things I like include photography, learning languages, going to watch ice hockey games, stand up comedy, playing board games, and lots and lots of other stuff.

I like meeting new people as I'm a pretty curious sort of person and like to ask lots of questions and get to know others. I also feel that staying with local people in the area helps to also get to know the place better.

Unfortunately, as I'm a digital nomad, I do not have my own place to stay so I can't host people, but when I was living in Olmouc, Czech Republic, I took an active part in the Couchsurfing scene there, going to monthly meetings. I even cooked Thai food for the one of the events.

Books: maybe I can name some authors instead? JK Rowling, Marian Keyes, Joanne Harris, Mark Haddon, plus others.

Sorry, but can't just pick one.

Viking sauna in Sweden. Met a wildlife documentary maker at the top of a mountain in Montenegro. Saw Angkor Wat at sunrise. White-water rafted in Malaysia. Sailed down the Nile on a traditional Egyptian sailboat. Spent a month in Chiang Mai. Toured Kansai in Japan. Visited some amazing cave monasteries in Georgia. And so on and so on...

I used to be an EFL teacher, so if you need help with your English, including things like grammar and punctuation, I can help you with that.

I have also recently discovered that I'm not too bad in the kitchen, so I could also cook for you.

I would like to share my travel experiences in exchange for yours (I'm always interested in comparing experiences and hearing about new places for me to go).