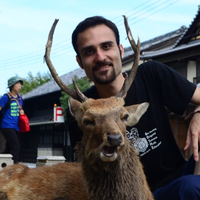 I am an avid paper artist, designer of some Origami models (For instance search Sakura Star with my name in google). I am also co-founder of Studiorigami.ir which is a Graphic Design Studio.

I lived 6 years in Sapporo since I was 2. I love Japanese culture and people. Since we came back to Iran in 1997 I have visited Japan 2 times in Aug 2014 and Aug 2016 for a total 3 months for an origami journey.

Meanwhile, I both learn and Teach Origami. I am exploring the mathematical principles and design aspects of Origami which can be used merely as an aesthetic design or an applicable Packaging Idea. ( Check My gallery for couple of images.)
Briefly Origami is both Art and Science. It's Amazing!

I like arts. I also do photography. can't call myself a pro, but an enthusiast.
I also love drawing. I some times sketch some cartoon figures.

Learning new languages is my next passion. I would like to learn more Italian and German and improve/recover my Japanese.

-Never Get disappointed...
-If you have time to whine and complain about something then you have the time to do something about it.

I Like meeting different people from different cultures and backgrounds. Sadly traveling to foreign countries are really hard as I haven't passed the mandatory military service. The good news is My country is Awesome and there is still lots of wonderful places that I can go and visit.
Iran is Indeed Amazing. I hope to show my hosts Iran the way It should be introduced. Beautiful, warm and nice people, remarkable hospitality, rich in history and art...

The last time I filled this field I did write: "I'm Brand new in CS. But so Far I have Hosted two guys. and met One."
Now I am glad to say that since I became member I met many many more people from all around the world. all of them were awesome and had their interesting stories. Few of them became not only my CS friend but my really good friends and few also revisited Iran. I really enjoyed them and I hope to learn more and more from this community and people as days pass.

Oh boy! the list would become too long for movies. I just name some : Okuribito, Untouchables, Studio Ghibli works, I am Sam, Seven, Seven pounds, Untouchables, Artificial Intelligence, Cinderella Man, Dark Knight, The last Samurai, The blind Side, In persuit of happiness, Into the wild (Yea!)...

In Aug 2014 I had the chance to travel to Japan to present my paper in an Origami conference ( 6OSME) which is being every 4 years in Tokyo. I also attended and taught two origami workshops. one in Ryukoku Univ. (in Seta near Kyoto) and another one in Toyo University in Tokyo. I traveled in Japan for one month all by couch surfing. I visited Sapporo, Seta, Tokyo, Nagoya, Nara and Kawaguchiko village. I also had the privilege to climb Mt. Fuji. The whole trip was and amazing unbelievable life experience and thanks to CS I met many kind Japanese people and hosts (Now friends!)

--------
I had the chance to have a one day trip to Alimastan Jungle in north part of Iran, The place was really beautiful and amazing and I indeed was feeling wonderful. The weather was so much fresh and clean, we saw some horses playing around and in the last part of our journey we faced a misty weather and we all were surrounded by fog... Somewhat surrealistic atmosphere. I took many nice pictures.I suggest all the people who are going to visit north part of Iran visit the place. You will not regret it.

I was part of a group called Roshana Origami and we built the biggest Origami Structure in Iran (almost 10'000 pieces).

My Interaction with Origami and the whole atmosphere and world that followed by doing it was the source of many great inspirations and experiences for me. I can tell you more if we meet and you are interested to hear more:)

As I mentioned before I do Origami and photography. I Have also experienced teaching in several subjects (mostly math). I can teach you origami and I am fairly sure that you will enjoy it a lot.

I would like to learn from people and hear about their stories and experiences. I am interested in different cultures and the way people live all around the world.

Origami, graphic design and many stories about people I have met and places I have been.