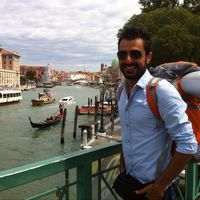 I love to travel and discover new places. I enjoy being on road trips across the world. I did four-month backpacking trip in Europe.
I had the best time of my life traveling and met many new friends. The highlight of my trip was my one week Andalusia road-trip with two other people I met in a hostel in Cordoba, Spain. We started from Malaga going down along the coast to southernmost point in Europe, Tarifa, visiting cities like Ronda, Gibraltar, Cadiz, Rota, Jerez, Benalmadena, Fuengirola, Marbella, Algeciras.

I've couch-surfed in San Jose, California and Geneva, Switzerland and Oslo, Norway and hosted people from Germany and the united states.

I'm interested in meeting new people and hearing their stories about their adventures. I love to travel the world and see different culture and places.

Being on a 2-month road trip across the US and 4-month backpacking to Norway, Switzerland, France, Italy, Spain, Netherland, Belgium, Germany, Cheque Republic, Greece, Poland, Hungry, Austria, Slovakia, Portugal, Sweden was the most amazing adventure I ever had. I have visited cities in Spain and Portugal along the coast, South Africa, Canada, Mexico, Costa Rica!