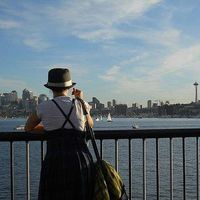 surfing, couch crashes/camps, hosting when I'm not on the road. also a great way to meet travel mates :)

i first couchsurfed in portland, oregon in 2011 and it quite literally changed my life. what began as a simple weekend trip snowballed into a 5 week long tour down the west coast of the united states. it was beyond amazing! this was only the beginning.

(people tend to reference the portland trip in their couch requests as a point of interest/common ground. honestly though that was so long ago i cannot give you any pointers on portland. sorry!)

since then i have couchsurfed/attended CS events and made lasting friendships (with both cities and people) in chicago (chicago couch crash 2012!!!), asheville, athens GA, los angeles, san francisco, and nyc in the states and berlin, krakow, and utrecht in europe.

less positive experiences followed surfing in mexico: one involving a crazy couple in cancun who literally locked us in their apartment, the other in cholula with a host who was a sexual predator. also here at home where a first-time surfer from germany made a drunken pass at me on his first night. not cool, fellas.

all in all: being a part of this community has been more positive than negative. i do enjoy the events and the meet ups and i've met some amazing people this way in many different cities all over the world. CS here in new orleans seems to be in life support though, unfortunately.

these days i host more than i surf. that being said, please read the "My Home" section before sending me a request. most people don't.

the arts, painting the town red, dropping out of society and living out of a van (presumably, i still have yet to try)

-attended a papal mass performed by Pope Francis at the Vatican

-backpacked Central and Southern Mexico by myself for 2 months

-quit drinking for 4 and a half years

-being a part of this amazing network of like-minded travelers!