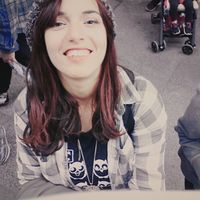 Travel the world and make a change!

Traveling has always been my number one passion and after many years I am getting the chance to do it freely.
I am a curious social creature I like listening to other's stories , what they've got through to get where they are , how they see life ,what they expect from the future and what they're willing to do to make their dreams come true, it gives me inspiration and as much as i talk to people whether they're tunisian or from other countries it makes me learn stuff about life and about myself on one hand , and on the other hand it gives me hope , you know successful people make you want to be a better version of yourself too and the ones that unfortunately fell at some point of their lives make you learn to avoid some paths and prevent you from commiting the same mistakes.

I am quite a beginner concerning CS, since it's not that famous in Tunisia although it's one of the most incredible concepts. I got to meet nice people through it, i haven't surfed yet, since i have been hosted by some family members whether it was in Germany or in France.

During my 24 years of existence i got to see people living their dreams , now it's my time to live mine : i want to travel the world to get to see breath-taking scenes and be where great men of the human history have lived and struggled to make our lives the way it is now. I want to get the inspiration to inspire others also and to make a change through my writings.

I will love meeting anyone who wants to tell his story , to share any tip or experience, to only laugh and chat around a meal or a coffee , to also walk around , to act crazy in the street and to just enjoy the day .

And hopefully we'll be friends along the way.

Never give up on your dreams, you never know what's going to happen! Also you have to enjoy life , laugh as much as you can even if that means acting silly and stupid, be who you are as long as you're enjoying and assuming yourself. People can make you feel hopeless and let you think that you can't do stuff on your own , but you know they're only holding you back since they're too lazy or too coward to go where you plan to go, so ignore all the ones who are always persuading to you that you CAN'T! It's your life , owe it!

I'd love to host you even if it's in my parent's house (Since I live in a university residence now, I can't host). I can also help you with arabic and french learning. I also can tell you about North Africa , about the arabian revolutions .

I haven't surfed yet but i got to meet some really nice locals through CS , i hosted some friends that I met through Polyglot and had two exchange students for the holiday but hadn't any couvhsurfing experience yet .I have to say , that nothing is worth the experience !

Since i was little i've been like taped to the tv , watching documentaries about people traveling , and my favourite show is "J'irai dormir chez vous" it's one of the most amazing shows i've ever seen .
I tried like everything , going from soccer to ballet dancing but never sticked to anything.
Now that i am grown up it didn't change that much , i still watch tv all the time cause it's the only bridge to the rest of the world, thanks to that , i have learned a little bit of Japanese and korean, i also know a lot of things about the other cultures. Watching everything related to others made me enjoying everything like i listen ti chinese , japanese , turkish , russian any kind of music . It's really amzing how even you don't understand the lyrics you learn to sing the song and get addicted to it.
Now that i am in college, i got to continue doing theater, the only thing that helps me relieve my stress. While acting i get to be whoever i want , it helps me escape the society chains .
I love Poetry and french literature.
I haven't changed that much since i was little i WANT TO TRY EVERYTHING and always eager to experience new stuff.

I can list you like 100 of my favourite movies ot goes from French to Taiwanese . I LOVE Korean movies and dramas and i am also a huge fan of mangas since i was 8 .
Music: i like the ones that has, like , touching lyrics which can like "it may sounds cliché but" can get to your soul xD? on one hand. On the other hand i like any music that release good vibes and listening to it makes your day.
Books: I read a lot especially in french and arabic , i love MOLIERE's plays and STENDAL books. Also i am addicted to NEJIB MAHFOUDH books , he's one of the rarest arabic writers who got the NOBEL prize in literature.

It might sound strange for a lot of people who are familiar with going abroad alone or with friends but here in the middle east and north Africa , even if the situation is a lot better in Tunisia , but still girls don't get the chance to do whatever they want here. SO i want by traveling telling the people around me that there's no diffenrence between a woman and a man traveling , that it's not scary at all to backpack the world. Also here couchsurfing is not that popular , since almost all the ones who travel, they go like with family or in an organized school trip , stuff like that so they don't get the chance to experience staying the night in a totally different city at a stranger's place.And what a satisfactory feeling to show people that you did it , that you wznt to the "so called adventure" alone that you made it and that being a woman is not an obstacle but a blessing and there is nothing that can stop you from doing what you love.
I want to learn how to get along with people from all over the world , learn how they live, how they see the world , how they spend their free time. What i can share on the other hand , is my experience as a north african student also what i know about other cultures since reading and learning about the others is my first passion!

I can share my country's history and our culture.
I canteach some arabic and french and I can try to cook or show how to cook traditional food even though I suck at it.