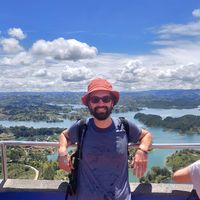 I'm currently traveling through South America after crossing the Atlantic Ocean by boat, through Canary's and Caraïbes.
I've tried to host for a few years, but leaving mostly far from city centers, I never received any demands.
I'd love to meet local people in the places I cross, to talk about their cultures and stories.

I like to listen to Rock, Jazz, Blues, a bit of Electro. I like to discover new styles of world music.
I like author's film, films with a meaning/message. I also like a good Comedy or Action film one in a while.

Being in Leh, Ladakh (In India), when the whole area was floated and devastated.
Not fun, but it taught me about the power of nature and it's fragility.