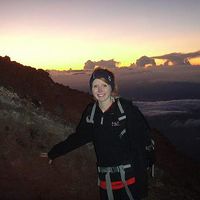 To erase the borders and share the world with anyone who has taken the initiative to see it!

Hey there! I'm Amber, a 27 year old American girl. I have the world's itchiest feet and am constantly bouncing around the globe looking for new opportunities and experiences. I'm an aspiring polyglot so if we happen to cross paths feel free to teach me a thing or two in your native language!

Not sure I'm eloquent enough to really sum up an entire philosophy into a few words but I'll give it my best shot: I live my life in the moment, for only myself. I refuse to compromise my goals in order to appease those around me and I don't impede anyone else's path either. We're all on our own journeys through this life.

I'm happy to offer up my couch, my home, and whatever random knowledge I've gathered over these last 27 years :).

Did lots of hosting while living in a cramped little studio in Osaka, Japan! I then did a huge trip around the world with my boyfriend and racked up some amazing surfing experience as well. Now it's back to hosting in my new apartment just outside of NYC!

Books--"Cien Anos de Soledad", "Alice in Wonderland", "A Moveable Feast", "Kafka on the Shore", "To Kill A Mockingbird", "Angela's Ashes"

Hard to choose only one but maybe sunrise from the top of Mt. Fuji. We ended up getting locked outside of the hotel in our tshirts at the summit and we're forced to shelter from the freezing rain in a bathroom with a bunch of other unprepared foreigners. It was the coldest, longest night of my life! But the view was so worth it!

Most types of people, but especially the humble yet interesting sort :).