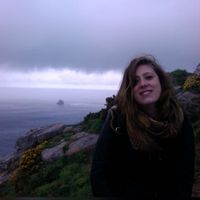 I like sociable people, capable of talking about anything, and capable of sharing a good dinner and wine.

When you are traveling, sometimes you can think some places are funnier than others, so if you want to open you mind about traveling go to Stockholm, but more than 3 days, you can became another person and don't ever figure out why.

About Joel's review. Joel's friend and I argued about feminism and we were very drunk... And it is obvius that it is a sensitive topic for me and it Will be in the future if man keep explaining to women how femisim should work or what feminists should do...