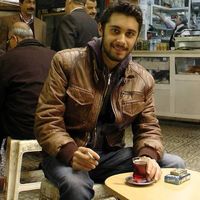 Half Italian, half German, fully from no-man's-land, currently living in the old town of Perugia. After quitting my life in Italy in 2019, I planned on reaching China by land, again, repeating a beautiful journey I did in 2013.
I had to stop midway because of covid and spent the lockdown in Armenia before flying back to Germany. Since then, I have spent a great year living in Vilnius, before traveling again and eventually stopping in Perugia.

I met some of my best friends thanks to CS. It goes without saying that I don't take it as a "free hotel" opportunity. I've often sent messages even just for meeting up in cities as I was travelling alone. Previously I've never had the chace to host anyone through the website, as most of the times I lived in place outside the city center - so you're welcome now!

Studying is my passion, and after I left university my goal has become to do it independently. My focus is on Greek philosophy. Kant, Schopenhauer, Nietzsche and Colli also have a special place in my heart.

I love eating, trying new dishes, learning about what and how things have to be done for a dish to have that specific taste! My favourites: Iranian fesenjun, biryani, Napolitan pizza, that sashimi in Tsukiji, my grandma's lasagne.

Travelling! I went from Nuremberg to Hong Kong by land in 7 months, and then from Cairo to Nairobi on a separate trip. Amazing things? Anytime I crossed a border, the Taklamakan and western Egyptian deserts, every single minute of exploring in China, Hong Kong, struggling to leave Dorćol and eventually coming back 3 weeks later, improvising a way to live in Vilnius out of nowhere and without plans, the people of the Sudan, the daily adventurous routine of travelling in Northern Kenya, Isfahan, Scotch whiskeys, going back to my family's village in Italy after...a few lives, being stucked waiting for the needed papers to finally leave after 4 years, accepting the whatever circumstances, loving them and turning them into something productive.

I can definetly share thoughts, stories and ideas with you, opinions. It's also very unusual for me to be stucked without cigarettes in my pockets: that's another thing I can share with you!