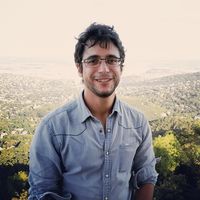 I'm Andrew and I actually love my first name:) I used to live in the eastern part of Europe in a mysterious country called Moldova, the Republic of. So, if you already have a question in your mind, where it is exactly situated, I won't be much surprised. Just a case of habit, you know. I guess, however, it's a great opportunity to develop the geographical skills now and to discover a lot of interesting stuff about my country:) I used the verb "used to" because now I've returned back to my hometown, Minsk. I'm currently studying here at BSU.

Some words about my personality, so that you know, whom you gonna send a message to. I was a student at the Language and Literature department of USM, equal to Moldavian State University, don't mix up with the Moscow one;) I was studying English and German for my diploma, gosh, and Spanish just for fun. I transferred to Belarusian State University which I finished in 2016. Now I am a software engineer in Minsk IT company. Besides, I am really interested in writing poetry, playing the guitar and watching sports. A small footnote, I am a big fan of all German athletes.

Don't believe in politics. Personal priority:
Personal development. Important in others:
Kindness and honesty. Neutral to smoking, don't smoke. Neutral to alcohol, can drink - can not;)

Ok, better say, I haven't contributed anything yet. I registered here some months ago after my friends had told me about this site. I didn't have any opportunity to couch somebody unfortunately. I'll try to do it later;)

1 night in Helsinki which was extremely helpful:)

I'm interested in lots of things. I'm curious about things. Most likely I can speak about languages, countries (my travelling experiences), sport, music, etc. I can share any of my interest as well as can be shared any of yours.

I prefer various kinds of literature and music. By the way, one of my major activities is connected with literature. You can check my preferences here: http://www.lastfm.ru/user/TOOUUR - for music; http://www.livelib.ru/reader/toouur - for books. As about films, most likely I will watch one that was shot before 2000. For the list of films refer to the following link - http://www.imdb.com/user/ur29063664/lists

Too personal question. But it was a flight to Moscow. I've never flied before and it was somehow crazy decision in between of my university exams but I never regretted about it.

During my presence I can likely do the following things: play chess with you, play guitar, teach you a bit of russian or english if you want to, retell you lots of funny stories and do whatever you would like. I would be happy to learn something from your own language as well.