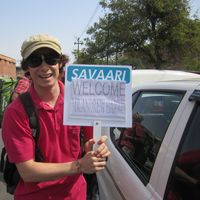 Hanging out in Melbourne and happy to meet up with 'surfers visiting Down Under!

Travel the world whenever you get the chance.

In 2010 and 2012 in North America, I have been hosted by CSers in Vail, CO; Aurora, CO; Providence, RI; Pittsburgh, PA; St. Louis, MO; Montgomery, AL; and Cancun, Mexico. I have also been put up by numerous other friends and family during this time.

I've hosted some CSers here in Melbourne throughout 2014, met up with surfers in 2018 at home and in Timor-Leste.

Socialising, sport and the outdoors, geography and history, and researching my next trip away!

My top read is Catch Me If You Can by Frank Abagnale.

And music - whatever comes up on shuffle!

And I climbed Sigiriya and Adam's Peak in Sri Lanka, 2011.

If you were willing to listen, I can explain the intricate laws of cricket!