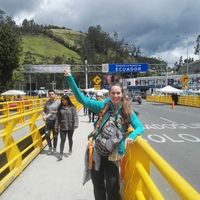 After travelling a lot in Europe, living in several countries and backpacking in Latin America for one and a half years, I decided to settle down in Mexico City where I am lucky enough to be able to host fellow travellers.

Some say I'm shy, others say I'm communicative. Some say I study too much, others say I party too much...
I don't like to describe myself, I would let everyone decide what I am like.

A day without laughter is a day wasted.

It changes from month to month: I show people around, I meet people to show me around, I hosted and was hosted quite some times.

Surfed many times and met so many awesome people through CS

Watching movies, jogging, hiking, going out, eating, drinking coffee :) travelling, meeting new people, talking about foreign affairs, doing something that I haven't tried before.
Lately, I've become more and more interested in photography and writing as you can see on my Facebook page (www.facebook.com/narrativista)

Before Sunrise / Sunset / Midnight, Ida, The Lighthouse of the Orcas, Seven Years in Tibet, Hotel Rwanda, The Motorcycle Diaries, Given, ...

Mario Vargas Llosa: The Bad Girl (much less nasty than it sounds :D)

Hiked 22 km in mud, rain, fog, on rocks and stones (without any previous hiking experience) and enjoyed it!

Hitchhiked in the most impossible places in Bulgaria

Currently, I am really into photography: I love taking photos of people but also about landscapes, I can teach some tricks about photograpy but also still need to learn many things about it.