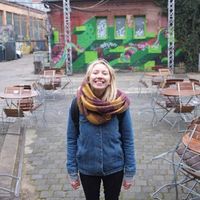 I finished studying biology in one of the most beautiful cities in the world and was lucky enough to not kill my passion for science completely by means of formal education. I am still a student though and I continue doing my master's in bioinformatics. I also work as a bioinformatician for a moment.

As my passion is somewhere between science and art I try to come up with an idea of a collision of these two things. More than that I always enjoyed telling people about different things that I learned. So I hope one day I will be capable of doing good science popularization projects in some way.

One thing I've learned from my first solo trip is that traveling is not just about sightseeing is more about discovering new. And the word "traveling" is applicable in a much broader sense.

Besides that, in the last 5 years, I managed to travel to all of the countries listed in my profile, meaning I have never been anywhere before that.
And this all happened while being a student very much on budget. I enjoy how Couchsurfing makes traveling available to everybody and how it does so through human-to-human connections. This makes traveling more like back in time pilgrim's style discovery of the world in the search of peace, than just consumerist use of well-known cities for the sake of fun.

Russian literature and poetry, Absurdist fiction, non-fiction sometimes, Nabokov, Brodsky, Sartre /books
Unfortunately, I still didn't find a way to truly enjoy foreign-language literature, especially poetry. As it seems to me that it really requires the ability to understand the full richness of the language.

My music playlists seem to contain just all possible genres so it is relatively hard to describe. But for sure there would be The Velvet Underground, David Bowie, the Doors, Nick Cave and The Bad Seeds, La Femme, Sydney Vallette, and Shortparis, used to enjoy some 'light' punk like FIDLAR, The high curbs, Kazuskoma. (Update: It also feels like my musical taste degrades over time, so now I much enjoy the music my 16-18 y.o version of me would call stupid and tasteless)/ music

- Crashed a car by controlling a huge hand :)
- I moved to live on my own in another country at the age of 18 which started a new chapter in life for me.
- I made one big trip through Eastern Europe which taught me a lot.
- Tried psychedelics.
- Graduated university

Languages, culture, stupid stories, love to good music and movies. Strange biology facts you don't wanna know.
Since I am bioinformatician I can also teach proper basics of biology, data science and programming, though it is hard to imagine I would do that during travelling. But at least I can share what is from my point of view best way to learn these things.

Best CHEAP Czech beer and love it. (Update: actually started to drink a lot of fancy craft beer recently, what's wrong with me today)
A glass of wine and some food is always better if it's shared.