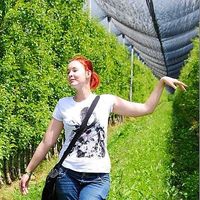 Stepping out of my comfort zone and exploring, because good things happen then. :D

I'd say i´m talkative and full of energy, like to do all sorts of things but most of the times I get bruised, cause I´m just a bit clumsy. I also love to bake and reeeally love to cook.. I like to think i´m easygoing and I find my place in almost every kind of company. :)

It's fun! I get to meet a bunch of different people from different places.. Making the world a global village even more. :D

I love adrealin, so anything that gets my blood pumping is awesome. :D But on the other side I just love to hang around parks and have picnics with a lot of people, cause what´s better than good company with some great food? :D Also music festivals!

One of the most awesome movies are LOTR trilogy, Idiocracy, the Cornetto trilogy and mostly all of the Marvel stuff .. Favourite show is definitely Doctor who and I'm currently working on watching the old part of the show.. Sherlock, The Flash and Agents of SHIELD are pretty awesome as well. As for music, I prefer rock but almost anything goes, as long as it's good..

I was the youth leader at an international exchange for the first time. I handled 30 teenagers from all over Europe, without anyone geting drunk or pregnant :P Plus I think they had fun and they learned some usefull skills :D
It was terrifying at first, but then I saw I could actually pull it off, and I did!

I can teach you to make a killer banana chocolate muffin with nuttella! I also know a lot of random fun facts.

Have I mentioned muffins?