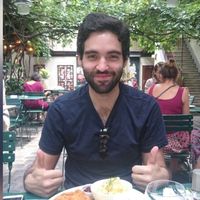 Hi All! I'm Antonio. Ive been a surfer since 2017, all good experiences so far! however I've mostly been a surfer. This time, I'm being more of a host! I arrived to Amsterdam last year in June after studying in Milan, Italy, then found a job here in IT engineering :D

I come from Venezuela originally, lived there for a long while. Then lived in Orlando (FL, USA) then Milan, then Hong Kong, then Milan again, and then Amsterdam! I've met surfers from everywhere and I'm super grateful to have met every single one of them.

I love food and music so much that I not only consume them, I also make them! I play some instruments like piano, guitar and sax every now and then. I cook and I'm a dictator in the kitchen but rest assured you'll eat like in a Michelin star restaurant. History is cool, we should learn from it. My favorite food tends to be burgers, ramen or lasagna, but I'm impressed rather easily by food so I might say "that thing" is my favorite thing although it might be my top 20 or something hahaha.

What else? IDK, it's too much. Just ask.

Love to travel of course, if not I wouldn't have created this account. Right now I'm more on the hosting side since I've settled in Amsterdam for now and it might stay that way for a longer while.

Feel free to ask what my next destinations will be!

Music: too much to write about.

Series: too many seriously. Dexter? Breaking Bad? The mainstream. Netflix lately has a lot of good stuff too. Anime sometimes too :)

Almost forcefully leaving my hometown to improve my life and study abroad in Italy and live as an immigrant. After thinking it through some months, I'm glad I did that (long story).

Jump from a 10 meter tall Xenote in Mexico

10KM runs in Politecnico di Milano crossing all the city

I know it says one but there's too much, life is awesome.

Anything I'm capable of sharing I will do. If you need help in nerdy stuff like physics or engineering or IT, I'm in.
Also, if you've got an instrument, whichever it is, I will force you to play music with me :D

Culture, jokes &amp; Stories. And anything that may come to my mind after trying to dig into it while filling this space.