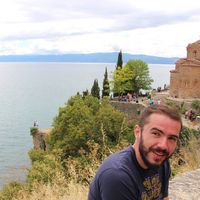 Laid back, often described as "chill af" (not my own words but I've been given licensing to use them) and a high functioning social drinker.

Will talk life, movies, music and politics at any given time, quite candidly so after a couple of beers. I'll do my best to be an active host, showing you around the city, partaking in outdoor activities and the occasional party.

It has been a while since hosted people, but remember it as a fantastic experience.

Had the chance to couchsurf myself and I have nothing but the best of things to say about the amazing people that hosted me.

This community is amazing, it brings the best kind of people together and I truly regret being away from it for as long as I was. Time to make amends.

Movies, music, fantasy art and fantasy in general. I always like a good get together with my palls for a drink, a laugh, a barbeque, preferably all off the above bundled up together.

Always enjoying a trip, with plan's usually unfolding on the flow, accompanied by surprises and twists. Discussing some deep themes like religion and space while drunk, patting ourselves on the back as the neo-liberals that we are coming to no logical conclusion whatsoever.

And always open to new acquaintances.