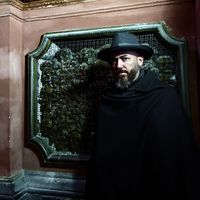 I host only ONE person and I like the exchange CS allows, so if you're coming to Milan to meet some specific friends, I might not be the host for you.

I also tend not to host hitchhikers, not because I don't like the practice, but because they can't guarantee their arrival (especially as in Italy it's not easy to hitchhike) and I often ended up waiting forever for people who didn't arrive. It might not seem a big deal in the grand scheme of things, but maybe I refused someone else to welcome them and it's not nice.

I am a freelance translator (EN to IT), specialized in video games, which I also play from time to time.
My hobbies are live music concerts, cooking, amateur photography, insects and arthropods observation. I have a taste for the unusual and for black humor.

I used to live in Tbilisi, Georgia from 2017 to early 2020. I had to return due to the pandemic and ended up being stranded here. Eventually I'll go back, but until that time you can take advantage of me being here. :)

A guest tattooed me.
Another shaved my head.
Another forgot a horseshoe crab shell, that she used to put on hear head while doing her mermaid-fire-eating shows.
Another assembled a simulacrum of a person in my room, for me to find, using stuff she found around including, but not limited to: a ceramic skull, kitchen gloves, boots, a drill, a hat and a cloak.
Another prepared a meal worth of a restaurant.
Two others lived (in different times) in my apartment in Milan while is was living in Georgia.
Others became friends for life.

(Also, I started to steal DNA scraps from guests in order to clone the nice ones and to find a poison for the bad ones)

If you like at least two of these, we'll go along pretty well. If you don't, be a good cook :D

Here are my socials, but please, don't contact me first on these, I would surely miss the message as it would go in the message requests section.

Books: well, many. I'm mostly into horror/sci-fi, but also comedy. I love alternate history. You know, the "what if..." stuff.

Movies: let's talk about this.

Witnessed the final days of Czechoslovakia's (not yet Czech Republic) Velvet Revolution in 1989.
Watched the 1999 total solar eclipse in Salzburg.
Went through the Nineties without being a Nirvana fan.
Tidied up my spice cabinet (SEVERAL TIMES!)
Moved to Georgia to learn Georgian.
Moved to Georgia to learn Georgian AGAIN.
Survived pandemic IN ITALY.

I can teach you:

- to cook a risotto and to make tiramisu.
- to say "starch" in Lithuanian.
- to tell a female from a male praying mantis.
- to pronounce ყ (a Georgian letter, kinda like stepping on a toad).

I'm willing to learn recipes and anything you can teach.

I'm a freelance now, so depending on the day I could be extra free (enough to show you around) or extra busy (working all day). Note that the second option won't prevent me from hosting you, but I won't be of much company.

I'll be happy to cook for you some typical Italian dishes and also some Georgian ones.