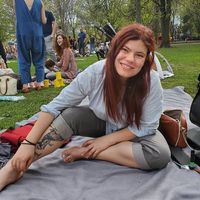 Go to as many shows as possible! Make all of the friends! See how many places I can paddle in (canoe, kayak).
I worked as a tour guide and I'd love to show you around!

I hate to be that person IF YOU'RE GONNA SEND ME A COUCH REQUEST please read my disclaimers in "My Home" - there have been a lot of really sub-par couch requests and it's taking away from the community vibe.

My life has been back and forth between Vancouver and Toronto, so my heart is kind of between them as well. I spent a good while in Kuala Lumpur and Tel Aviv so my heart is also in those places. Overall, it's with music, which is why I moved to Toronto. I'm kind of like a puppy. I get excited really easily, and I like to share that excitement. If you get me rolling on a topic I love, chances are I won't let the conversation end. I'm also really friendly, and love pretty much everyone. I like to think I'm funny... You'll have to be the judge of that. Adventuring is pretty awesome but I also appreciate a day of just hanging out. When I'm in Toronto, I work in restaurants. In Kuala Lumpur, I'm a teacher. I'm super laid back, but at the same time I have a real thirst for knowledge. I love sharing stories and connecting on real levels. I love people and their souls.
I am queer and Jewish and I consider myself an intersectional feminist who's always learning.

As of Sept 5 2015, my guacamole has been approved by Mexican guys and my shisha approved by a Persian dude. So that's worth mentioning.

Summer of 2015, I hosted some lovely Spanish girls who showed me how to make a Spanish omelette...
March 20 2016 I made it for a Spanish friend and she said it was perfect. Woo!

Took a hiatus from CS, right back at it again!
2019 I now live in a Queer Jewish Community house called Moishe House. We put on events for the community (you don't have to be Jewish to come)

Started hosting through an old roommate, and it was pretty awesome. I haven't been able to host lately or be hosted, but I hit up the USA a fair amount, I lived in Malaysia for a bit and made some INCREDIBLE friends through CS events and meetups. The people I've met on here are friends for life, and I know I'll have somewhere to stay wherever I go.

We've hosted a chick from Japan, introduced her to Halloween, a guy from India, and a band from Brooklyn, a whole lotta Germans, a french dude, a band from London, some Americans... it was all really awesome. We've explored, shopped, went to shows, partied, got late night butter chicken, played games, cooked together, learned languages, watched Disney movies and sang along in our respective languages... it's been unbelievably memorable.
I had one bad egg who wasn't on here. He stole the strings off my guitar...
But we later hosted one guy who replaced my strings without me saying anything and he restored my faith in humanity and couch surfing.
I lived in Malaysia and partook in CS events and meet ups and met the most incredible people. CS changed my life there.

I'm here to partake in a global community. I'm here to make friends from all walks.

Books: Catcher in the Rye. Tweak. Clan of the Cave Bear. Harry Potter. Amanda Palmer's Art of Asking. Any sort of memoir or story of travel.

- Walking along the Great Wall of China
- Waking up at 6 am, teaching a quick paddle lesson, taking some canoes out on a lake and watching the sun rise on the water
- The first time I got media approval for a huge festival... knocking off every interview I'd wanted to do, getting filmed for MTV and then later watching my interview with my favorite band on TV.
- Made friends and ended up back at their place and pulled an all nighter just putting on records and singing along to our favorite bands.
- My whole experience in Malaysia in 2015 and 2016
- Spent New Years Eve 2015/2016 on an island in Malaysia with 25 friends camping under the stars and seeing the glowing plankton
- Celebrated Pride in Tel Aviv in 2017 and 2018

I will happily cook for you or take you out for a meal.
I can share my stories with you (some of them are really entertaining)
I can share my favorite music with you