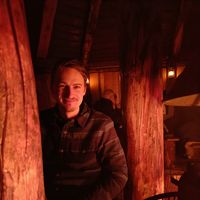 Well, I've lived in Ghent all my life and I did my fair share of travelling within Europe.

Sometimes I get distracted quite easily and that makes me kind of a daydreamer. I'd say I'm a social person because I like to talk a lot. This doesn't mean I can't listen! :P

If you'd ask my friends what my passion is I'm sure they'd all say 'history'. I'm somewhat a history nerd. But it's ok because I tell myself it's cool to be a history nerd.

I just wanna say that I like hosting people so I can find out more about them and maybe their culture. So while I welcome everyone I'm not a big fan of people just only doing it for the free room. But if you for example wanna do a day of Bruges and a day of Ghent, that's fine too. :)

I can recommend the Gentse feesten (Ghent festival) as the ideal time to come along. As there is alot to do then. Gigs, streettheater, dancing, celebrating,... and it's likely that I'll be home then.

I've couchsurfed in both London and Paris and went on a longer Couchsurfing trip to Poland, Germany, England, Wales and Ireland. Great times. I've also hosted quite some people.

I would really like to travel to other countries and meet the people who live there. I want to do some travelling of my own around Europe. Since Europe is in itself a mixture of cultures right at my doorstep. I've been to many of these countries before but almost never did I really get to know any locals. Only when I went to a wedding of some family I have in France did I came in touch with people who grew up with other languages, other culture. And since then I wanted to get out there and meet different people . Couchsurfing seems like the ideal way to do so.

And apart from travelling I also have an interest for lots of other stuff like music, history, Festivals (Best times of the year), parties, concerts, philosophy,...

Music: Well I grew up listening to metalcore/hardcore/punk and stuff like that and was very narrow bent on that genre. But the last few years i've been listening to more different kinds of music. And now I'm open to anything new and original. Most music of these two Belgian musicfestivals I listen to: Dour festival and Groezrock. When I'm Couchsurfing I like to listen to and find out more about the local music.