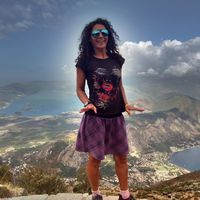 Travelling maniac, but also lazy at some times.
Like to give away things, but also to receive them.
Love exchanging lots of items.
Love going to concerts, dancing and taking photos.
Helping is something that comes out of me naturally.
Prefer to be alone, but not lonely.
Rather listen than talk.
Hitchhiking. Trains. Long walks and hiking.

There's a song I like that explains me very well :)

and... I'd rather leave some things to be discovered because we are always more than it's written here :)

* carpe diem,
* never give up,
* never grow up completely,
* question everything,
* learn from the elders,
* being nice is better than being right,
* laugh so your muscles hurt,
* smile is a free way to improve your chances,
* small things/details make life extraordinary,
* ignoring facts doesn't change them
* no gods no masters!
* it doesn't matter who you kiss, it's kisses that count etc.

I believe it all started in the family. I remember when I was little I used to spend summers in my village with grandparents and since their yard was like a shortcut to the main road, I used to see a lot of villagers passing by and sometimes it happened that they had been walking for hours, so they would stop at the house late in the evening, my grandparents would easily accept them for a night over, but my sister and me were always afraid of unknown people, we would lock our room and stay there until we were sure they were gone :). It was something strange for us then. Fortunately it changed as we were growing older and started seeing the similar thing at our new family house. As it took a few years to finish it, some workers would spend nights there, then our relatives or family friends and it became so common to have someone staying over for free. Now I've been doing the same over years. It first started with penfriends, friends of friends, hitchhikers..I myself have always preferred staying at a friend's rather than in hostels. I used to organize concerts in my hometown, so bands would sleep in my house, sometimes 12 people at once, but it felt good to know you've been helpful.
But, when I joined CS things have become more easy. So far so good.

I want to try any chocolate bar/choco biscuit from all the countries all over the world!!

I'd love to attend wedding parties all around the Balkans. So far I've only been to ones in Croatia, Macedonia (ex-Yu) and Greece. Therefore, think of me when planning your wedding party ;-)))

Beside travelling, these 3 are my next of kin :)
I do love music (listening and collecting), films (watching and collecting) and books (reading and less collecting lately). Can't imagine my life without it. And these 3 go so well with couch surfing and my unstoppable wish to get more from all around the globe. I remember last time I got back from Turkey with over 20 dvds and found a few stunning films I would have probably never been able to see here!

FILMS: European or non-american cinematography, drama mostly (Tony Gatlif, Pedro Almodovar, Isabel Coixet, Ken Loach, Fatih Akin, Nadine Labaki, Ferzan Ozpetek, Ki-duk Kim...) But, it would be too cynical to say I'm all against American films since my faves from my childhood have always been StarWars and Indiana Jones :) Plus I like the classics and most films coming out of the SunDance festival. I find reality shows utterly stupid &amp; boring and can't get hooked on TV series!

MUSIC: I luv music that makes me move , dance , sway , jump, bang my head , wander off or whatever, so I'm very open to any kind, though what makes my heart stop for quite some time now is anything with prefix post like post rock, postcore, post metal, post punk, but I'm still into emo, ska, reggae, alternative/indie rock, then lots of world music (call it ethno/folk/traditional.. whatever you like), especially Balkan, Gypsy, Spanish, Latin, Armenian..., then some jazz and lounge, and finally and rarely lately renaissance and classical music...

My all time favourite song/dance is Sota / Shota by all means!!!

2007
Magyar Posse (thanx to the wonderful blogspot world out there)

2008
Almamegretta (thanx to Roberta, an unexpected guest after the Guca festival)

2012
Bomba Estereo (thanks to Arely in the Chilean desert)

2013
Parallels (thanks to the feature in the short 'Curfew')
Moon Hooch (found it listed as a fave band on one CS profile, checked it and WOW! Now how great is that..!)
Bambir (thanks to Elissavet on the way to BMM in the Greek labyrinth!)

Depends on what you consider to be amazing.. My family thinks it's amazing and crazy when I bring people home to sleep and have just met them on the street or road hitchhiking knowing nothing about them.

Been left at the Albanian-Kosovo border by 2 Germans who couldn't afford to pay the car insurance and I continued on my own hitchhiking home with the help of Kosovo police and Albanians :)

LEARN: My colleagues used to say that I 'steal knowledge' just by watching and it might be true as I have photographic memory, so anything you can show me, I'll learn, whether about computer software or technology in general, web design, photography, practical skills or tango dancin (though I prefer listening and watching others dance cos it makes me feel like flying..).

I wish I could sing and play an instrument, accordion would be appropriate now, but no talent + I'm too lazy :(

TEACH: Teaching.., I'm used to showing everything I know to others as to make their life easier and their work more efficient..
Does experimental cooking sound anything attractive?
I can teach you tolerance if you're ready for it.