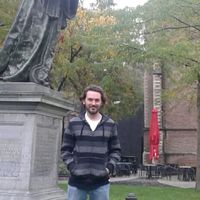 I am on a quest to radically improve myself, and the world in the process, after having lost the past decade and a half of my life to debilitating medical issues (which after seven years were finally diagnosed as Lyme disease). Now that my brain is back online, I mean to put it to good use! Along the way, I've learned a great deal about patience and persistence, and have come to realize that the key to success and happiness in life is replacing expectations and the frustration to which they inevitably lead with genuine curiosity (which is a sort of open-ended expectation) and the appreciation to which it leads. Still working on that. :)

I'm traveling the world while working on my book on evolutionary theory, On the Destiny of Species: How Evolution Evolves.

This could be a long list, but I'll just mention a few recent favorites and a few all-time favorites.

Books - The Evolutionary World: How Adaptation Explains Everything from Seashells to Civilization, by Geerat Vermeij

The Lagoon: How Aristotle Invented Science, by Armand Marie Leroi

Why Information Grows: The Evolution of Order, from Atoms to Economies, by César Hidalgo

Energy: A History, by Vaclav Smil

The Innovators, by Walter Isaacson

What Technology Wants, by Kevin Kelly

The Wright Brothers, by David McCullough

The Origin of Species, by Charles Darwin

...you might be picking up on a theme here.

Oh, and Harry Potter, of course!

Currently reading: Creation: Life and How to Make It, by Steve Grand

Movies - New all-time favorite: Moana! (I could literally write a book about how great it is.)

Zootopia (friggin' brilliant...the plot hinged on a deep principle of evolutionary biology, and ultimately the laws of thermodynamics!)

Monsters University (really great theme about embracing adversity as a pathway to progress, to paraphrase a line from the Serenity prayer...and speaking of Serenity...)

Guess Who's Coming to Dinner (the whole cast is brilliant, particularly Sidney Poitier and Katharine Hepburn...and speaking of great acting...)

The Miracle Worker (by far the greatest dual performance ever by Patty Duke as Helen Keller and Anne Bancroft as her teacher Annie Sullivan, in the only movie I've ever seen with a purely epistemological theme!)

Music - Sadly, I haven't had time for years to explore much (if any) new music, but some of my favorites include classical composers from Rossini to Rachmaninov, as well as American orchestral classics from Louis Moreau Gottschalk and Leroy Anderson to film score composers such as Bernard Herrmann, Jerry Goldsmith, and Danny Elfman. I also enjoy a lot of American popular classics, from Fred Astaire to Sammy Davis, Jr., to Muddy Waters (check out The Woodstock Album he did with The Band!), and some bluegrass from Lester Flatt to the Punch Brothers. My favorite album is probably Buckingham Nicks. And this just covers some of my favorites and isn't especially representative of my music preferences as a whole...my iPod will probably blow your mind. ;)

I started a podcast on innovation and integration called Seeing I to I with a friend in New York...the first several episodes are available on iTunes, YouTube, etc.

As a philosophical coach with a background in epistemology, I can teach you how to see the world from a broader perspective, including thinking skills applicable to any other field (such as thinking from first principles, abstraction as inclusion, not omission, &amp;c.)

If you like deep or self-reflective conversation, you will find an abundance of it with me :)