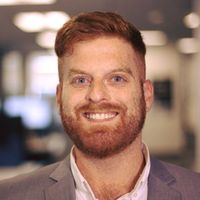 I believe the best way to get to know somebody is by the food that they eat, and for that reason I will never turn away a plate of food! I love to travel and recently found myself traveling more domestically then internationally. I have lived in South Korea and traveled Southeast Asia. I have lived in Atlanta, Kansas City, and now Seattle. I enjoy learning about people's pasts and what makes them, them..

I have been getting a lot of weekday requests - I cannot host during the week. Friday and Saturday nights only. I don’t offer a “couch” but a large, comfortable, queen size air mattress with fresh sheets and a pillow.

**UPDATE** I live in a studio apartment as well (no more roommates), so the space can be a bit compact with the air mattress! - but it has a killer view of the water and mountains.

To get away from the typical hotel experience and get to know the culture fully by "living" directly in it.

Pretty much anything with Will Farrell, Adam Sandler (older movies only) or any of the funny or die cast. Love a good comedy.

Lived in South Korea, twice! Put a prayer in the western wall in Israel, and eaten on remote beaches in the Philippines.

A clean and safe place to sleep. Great conversation, and hopefully some tasty Seattle eats.