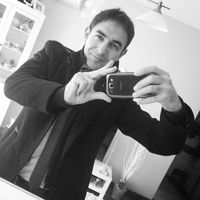 I was born in 1983, in Mersin, the south of Turkey. I studied Translation and Interpretation, and then, EU Politics and International Relations, on which I'm still a PhD student.

I worked as an English teacher for about 10 years, and now I am a PhD researcher at the Linköping University, Sweden. I study migration for my PhD thesis, and in fact, I also feel myself as an asylum seeker who seeks for asylum around the world.

Well, I rode bicycle in London streets, had a cruise from Stockholm to Riga, tasted ice-cream in Rome, danced in Venice, swam in Barcelona, slept under Eiffel Tower in Paris, camped in a little tent for ten days in the southern and western coasts of Turkey, and lived for ten years in Istanbul. At the moment, I'm a Visiting PhD Researcher at the Linköping University, Sweden.

In fact, I've been a member of Couchsurfing since 2009, but I'd never had a chance to 'couchsurf' here before the ones I had in Brussels on July 2016, in Stockholm on October 2016, and then, more. I'm on Couchsurfing because I want to strengthen my empathy with asylum seekers whom I study for my PhD thesis, and I try to seek for asylum all over the world while I participate in winter and summer schools, seminars, conferences, etc on asylum. It would be great to know new people from various cultures who regard 'other' as 'self', vice versa!

Reading, writing, listening and speaking; shortly, all skills for communication.

All sounds and voices of the world which make me feel life.

Lord of the Flies by William Golding; For Whom the Bell Tolls by Ernest Hemingway; The Trial, The Metamorphosis by Franz Kafka; 'Aşk' by Elif Şafak.

I'm a candidate for being a polyglot. So, I'm enthusiastic about learning and teaching new languages. I can share all my knowledge and experiences I have. If you also wish, I can share all I know about academic career.

I can teach Turkish and English or some techniques for learning a new language. I can cook and help to clean the house if necessary. Last but not least, I can listen, listen and listen to you as a Virgo and share whatever I know on life.