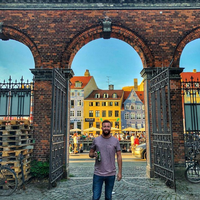 Florida bored me after graduating from the University of Florida and I had a spare Canadian passport so I packed my things, quit my job and have been living it up in Toronto for over 6 years now.

One of my biggest passions is traveling. (Me and everyone else on Couchsurfing!) I studied abroad in Madrid, Spain in the spring of 2009 which is when I explored most of Europe. That summer, I worked at the Pink Palace hostel in Corfu, Greece, where I met some of coolest people I know. More recently I've been spending the summers in Eastern Europe and the winters in Central/ South America.

I rarely say no to an opportunity to try something new and I love new experiences. Especially living in Toronto, I love going to sporting events and discovering new music. If you stay with me for any amount of time, we will probably go to a concert. I check http://www.blogto.com/events/ on a daily basis to see if anything interesting is going on in Toronto.

I'd be happy to show people as much of the city as I know, or for that matter, explore the city together. Whether you want a host or just to meet-up for coffee send me a message and we'll try to make it happen.

*If you send a requests, please at least pretend your read my profile. If you send a copy and paste request, don't expect a response when I decline. I also haven't had great experiences when people are either moving to Toronto or visiting friends in town, so I'll probably decline those requests."

Any outdoor activities.. I play tennis and golf. Love going to sports games. Traveling, meeting new people. Music.. I always enjoy a good night out and rarely so no to the chance at having one.

Books: Mostly non-fiction unless it's a can't miss. I\\

How can I pick one?

Summer working at the Pink Palace in Greece

Football Game at the Big House in Michigan

Well actually maybe drinking vodka at midnight with a homeless guy in the train station at the border of Poland and the Czech Republic.

We'll have a damn good time, hit some breweries, maybe a concert, rent bikes and explore the city.