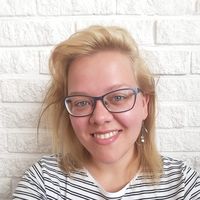 I'm a 24-year-old from the Netherlands, who has just started her master's in Film and Audiovisual Media and would love to meet people interested in my home town Groningen!

During my Interrail trip around Europe earlier this year, I had the honor of staying with a fabulous host in Athens, Greece. She introduced me to the wonderful world of Couchsurfing and the lovely experiences that come with it.

My all-time favourite band is Green Day. Their music has been there for me ever since I was nine years old, and fifteen years later they're still my go-to. Other favourites of mine are Jake Bugg, AURORA, OK Go, Pierce Brothers, YUNGBLUD, and George Ezra.

My favourite movie is The Truman Show, but a movie that had a huge impact on me was an Italian movie called Lazzaro Felice.

I love to read whenever I get the chance and the last book I read was Ian McEwan's On Chesil Beach. My favourite book of all time is Ella Minnow Pea by Mark Dunn.

When I was 18 I went to study in London for a year and in 2018 I lived in Iceland for six months.

I'm a baker at heart, so I will be happy to bake something delicious for you or cook you a traditional Dutch meal. One of my main hobbies is to sing, so if you play an instrument, let's jam!