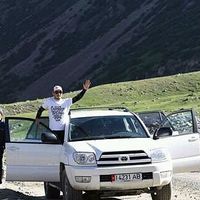 Artist in pursuit of Kings of the world today in the UAE
Azamat Dzhanaliev is an Artist hailing from the Republic of Kyrgyz in Central Asia. Along with being a profound Architect, he is also a writer and a storytelling traveler who is dedicated to deliver the message of friendship, connection, and peace via his artwork called String Art.
He is notable for creating artwork with an exceptional detail of visionary leaders, whom he believes have made a difference in shifting paradigms of the norm to a level that brought in great developments. From the portrait of Aitmatov of Kyrgyz Republic to Vladimir Putin of Russia, his work has been recognized by government bodies and has been awed upon for the incredible detail achieved through nails and thread.
It is travel that opens the mind and lets you see the world from a different perspective and the connections you make are the ones that you carry along all your life, this notion is expressed with the binding of nails with threads, leaving a trail of connectedness in all of his portraits. The bond of the threads to the nails in his artwork symbolize connecting minds and people in bonds of friendship and association.

Along with studying the founder of UAE, Sheikh Zayed Bin Sultan Al Nahyan, the current rulers of Abu Dhabi and Dubai and the respective crown princes, he has accomplished a set of 7 portraits for the UAE and anticipates the moment he is able to meet the leaders to present it to them. Moreover, he connects himself to poetry with the likes of Sheikh Hamdan Bin Mohammad Al Maktoum of Dubai by stating a famous translated Kyrgyz quote ‘’He who does not have a dream is poor no matter how much money he possesses’’ -i.e.: It is vision that makes you delve into following your heart and all the better, when your vision is responsible for making the lives of many take a new leaf.

Azamat is responsible for holding a charitable trust named ‘’ULU Kyrgyz Izi’’ in his homeland Kyrgyzstan that revolves around the idea of making children realize their dreams. Children are the future of tomorrow and are the force that can bring about a change in a country. He recalls that in times of despair when he had lost most of his health and wealth he visited rehabilitation center’s to connect with others. Being a people’s person and visiting more centers he met people and children who had remarkable intelligence and talents but since there had been no prospects they couldn’t achieve their dreams. He has promised them that he shall return back to change their lives by improving the inadequate supplies they have with proper nutrition, wellbeing, and education.

Along with this driving force, in future, his aim is to collect funds with this artwork to plan for an international community for young children who have the potential along with intelligence to push them beyond boundaries bringing about changes in the world. A lot of Arab supporters are expected and as Design District has supported quite a lot, in gratitude he reiterates his wishes to present the collection of the 7 portraits to the UAE leaders. This would be a dream come true and will savor the soul of a person who thought he could dream big and achieve it.

Along with his big plans and despite all the odds on his side, he humbly proposes the mission of traveling to 70 countries in 7 years. Till now his preservance has remarkably led him to travel to four countries via bicycle, he shyly concludes he hopefully will not need to travel to other 66 via bicycle.