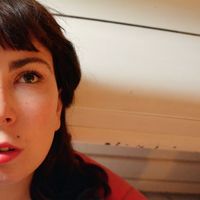 Autohagiographer: One who speaks or writes in a smug or self-aggrandising way about his/her life or accomplishments (thanks to word-of-the-day calendar)

So in an unautohagiographic (is that a word??) bombshell: I'm a currently breathing, functioning (most the time), 23 year old with a lust for life and meeting new folk such as yourself.

Too little a box for such grand and memorable experiences.

Have a penchant for all things bright, colourful, textured and noisy. Music of all sorts. Black and white films, especially French New Wave, are a regular pleasure. Beer, wine, music and good company always equates to mesmerising times. Photography, reading, anthropology and drawing. Hitch-hicking and meeting new and old souls on the road. And last but not least... GARLIC!

I was walking back to my hotel in India and stumbled into what appeared to be a mobile street party. We followed and were invited into the celebrations which ended up being a massive, exuberant wedding. Food, music, dancing and a plethora of colours!!!

I can teach you my Nonna's pasta sauce recipe.

Share stories, the ones that are happy, sad, or a nondescript place in between.