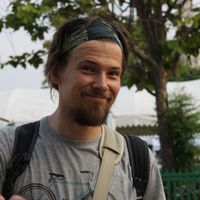 Hi! I'm Domen. I was born in a country that does not exist any more (Yugoslavia) and raised in the one that is best described as a wonder (Slovenia), both for its beauties and its social, political, and cultural realities. Since I was a boy I have been eager to know what lies beyond the dotted line that encircle our chicken-shaped country on the map. Somewhat unsurprisingly, I ended up becoming an anthropologist and a tourist guide.

By now I learned that the world, both in geographical and socio-cultural terms, is far too big for me to see and do all the things I would like to. However, each moment I spend on exploring it proves as a valuable investment.

My solo cycling trip from Scotland to Slovenia (+3000 km) would likely be closest to the given criterion.

My knowledge, experiences, stories, help.. other is negotiable depending on the circumstances. =)