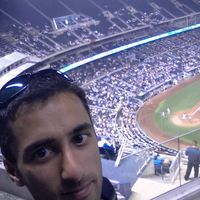 Who would have thought, been in one town for more than a year for the first time since finishing school. Where lots of people don't think much of our city I'm proud to be an imported Prince Georgian. The only thing you need to do to love this city is embrace the seasons and enjoy the outdoors.

While traveling I try to pick up culture, but also entertainment (2009 for instance brought me to Hertha BSC's Olympiastadion &amp; AC Milan's San Siro, as well as Gotenborg's casino and Tallinn's hip, but quite empty, nightclubs) and do stuff you can't do at home (like diving next to nurse sharks, climbing volcanoes and roasting sausages above glowing rocks). Besides travelling if I get the chance to participate in some kind of sport (especially football (European football that is, I'm a Vitesse Arnhem fan) or watch a world cup match on tv (don't mention the 2010 World Cup final...) I'm hooked! And now I'm in PG in winter snowboarding is my new addiction. You can find me on a hill almost any day I'm off work.

I've surfed in a couple of cities, visited some meetings in my home towns and have had some surfers on my own couch.

I CS'ed in Portugal, Spain, Venezuela, Norway and French Guyana and more recently also here in Canada. All were different experiences, but all very positive. I think I'm hooked to CS now ;-)

And having surfer's at my place helped me to see my own previous city in a different light, never realized what a difference it makes if you're in your own city with visitors!

Since moving to PG already have had quite a number of surfers here, all good experiences with interesting and fun people. Also met up with some local PG CS'ers.

Travelling, sports football (soccer), mountain biking, tennis, golf (haha, I know it's not a real sport, but it makes for a nice walk in the park) hockey (ice), skiing and what I consider the best sport of all time - snowboarding! A good party now and then, poker, games (board games, music (festivals), watching football matches, hanging out with friends, finding ways to have to spend as little time doing household stuff as possible, trying to maximize my time in bed in the morning without being late for work.

Music: Mainly rock: Metallica, Muse, Rammstein, Alter bridge, Linkin Park, Papa Roach.
And a bit less mainstream: 36 crazyfists, Parkway Drive and Funeral for a Friend.
Also love some dance tunes! The Prodigy and of course the dance legends from my own country, Armin van Buuren and Tiesto.
And combining dance tunes &amp; guitars: if you haven't heard of Enter Shikari or Horse the band give them a chance!
Movies: Slumdog Millionaire, Ace Ventura, Van Wilder, Blood Diamond, LOTR, The Matrix, Harald &amp; Kumar. So sometimes 'good' movies and sometimes 'awful' movies that are just so silly that I think they're very funny, though a lot of people might not think so).
Books: I just picked up starting to read books again after a long while. Spanish ones to practice that language. Read a Pablo Coelho book. Not too sure whether I liked it or not. Just finished Los Juegos del Hambre (Hunger games).

Just having the chance to visit so many different places and gain so many great experiences.
And starting couchsurfing, never would have thought I would ever do something like it a couple of years ago.

I hope to be able to show you around in PG a bit. And I can teach you how to cook Dutch food (even though it isn't haute cuisine). And I did a fair bit of reading about texas hold'em poker so I can hook beginners up with a basic idea of strategy. And if you're interested I can even give you a look behind the scenes in a veterinary hospital (just ask me if you'd like to have a tour if you're interested). In winter I can teach you some snowboarding, skiing or ice skating.

Pretty much the above :) Plus travel info on a lot of different places.