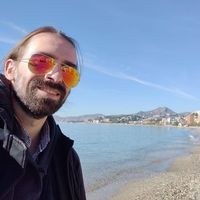 I don't have travel plans at the moment but i want to meet new people from different cultures.

I prefer to meet interesting, open-minded and/or crazy people, don't worry I'm not a psychopath myself:-)
So far I met a few really crazy people, which is awesome :-D

In my 'professional' life I'm a programmer and at the moment I work remote for a company located in the middle of nowhere.

During my free time I go a lot to concerts, usually metal or prog rock.
In Belgium we have the luck to have a gazillion amount of concerts and festivals.

I don't have a car so i have to depend on public transport or my bike.

Be open-minded but never trust any politician.
Always try to do things that makes you most happy and completely avoid the things you hate.

I'm not going to write down any cheesy one-liners here like my brother did!
Also i hated philosophy in school, i had the most annoying teacher ever which didn't help

I have an apartment not far from the center of Antwerp, it takes only 15 min by tram to get there.

Since i also have 1 guestroom, i can host up to 2 people.
In emergency cases i can make room for up to 3 people, but then i'Il have to sleep on the couch:-)

My place is often a mess though, especially my kitchen because I'm too lazy to clean

I started to host at the end of August 2012 and so far I hosted around 160 people I think. (September 2017)
Because I was unemployed I could also show them the city, depending on my work situation I can show people around.
I've also hosted some people outside of couchsurfing: ex. friends of friends and bands on tour who needed a place to crash.
Sometimes I get a lot of CS requests during the same period so I have to turn down guests for that reason.

Music: mostly metal and prog, I go to quite a lot of concerts each year
Going out with friends
Technology &amp; Media: I do video editing from time to time and I'm a professional programmer
Sport: jogging, i started 10 years ago and i'm still slooooww, but i wanna stay in shape.
Also biking from time to time.
Movies
Video games: i have a PS5, PS4, PS VR, Nintendo Switch, multiple controllers and a ton of games if interested
Boardgames and cardgames: yes the nerdy stuff

I've hosted an awesome band called Botanist (5 people plus their driver), they played the Roadburn festival in Tilburg.
The day after we visited the center of Antwerp and I showed them around.
It was an awesome experience and they are some of the nicest people I've met.
Hosting 6 people at once is also my current record ;-)

I can guide people around the city.
We have a lot of beers here in Belgium i can suggest.
I know a few specialized bars, including jenever bars.

I'm a lousy cook and i'm probably too lazy to ever become better at it unfortunately
I'm specialized in software development, but that topic can put anyone to sleep instantly:-)