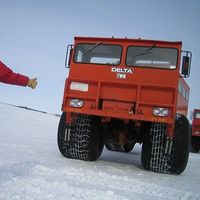 I was born and raised in San Francisco's Bay Area and called Berkeley my home for my university years. My hippie-ish parents (they won't admit to it) raised me to be a free thinker and Berkeley reinforced that.

At the age of 17 I discovered electronic music and the rave scene and became a DJ, which helped put me through school and boosted my ego much more than I really needed. After graduation I finally left the US and experienced Europe and the glory of hitchhiking. I also fell in love with volcanoes, and parked myself in Hawaii to commune with the goddess Pele.

However, the song of the road beckoned and drew me as far as India on a fourteen month bare-bones journey. By that time, my girlfriend back in Hawaii threatened to disown me, so I reluctantly returned. That lasted for a mere twelve months, and I looked to the east for new roads to wander. Four months in Southeast Asia proved to be a mere scratch on the surface, but the prospect of employment in Antarctica again drew me back to my homeland.

I got the job, and after a side trip to Central America where I fell in love with an old friend, soon to be my wife, and I took a long ride south, to work on the frozen continent during the Austral Summer. I ended up spending four seasons there, with jaunts to South America, Asia, and Hawaii in between. Now I'm back home in Berkeley working as an engineer for a solar installer and loving it. Domestic life isn't so bad and now I can finally be a host!

Latest update - I have a son! He's a year old already! Life has changed, no doubt.

So long as you're happy and not making others unhappy, life is good. Do what you can to keep it that way. Don't get caught up in the negativity of the world, because so much of the positive is overlooked. Just smile, and you'll see someone smile back.
Never let go of your dreams! Follow them to the sweet end!

Just trying to get back in the game, slowly...

All over the world, from mud huts to luxury hotels. Human hospitality never ceases to amaze me.

I spent an afternoon at Round Mountain in the Dry Valleys of Antarctica. Stunning.
I fixed a car that picked me up in Cambodia.
I watched the birth of the Earth at Kilauea volcano.

Hitchhiking-It's my passion and I work every day trying to further it.

Engineering-It's what I went to school for and keeps my brain happy.

Antarctica-My second (third?) home and I'm happy to answer all your cool questions.

And I'm happy to help any travel newbies that don't know who or what to ask!