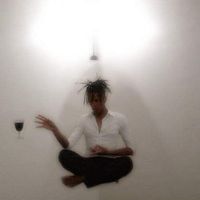 I am a philosophy student, a writer and a lush. Geographic, economic, creative and intellectual freedom are important to me. I spend my free hours wishing desperately that I were clever enough to transcend everything except being an experiencer of things. If only I could somehow project myself into everything at the same time, have multiple races, sexes, no history; if I could be indistinguishable from my observer, then I would be happy, if not torn.

Hosting and surfing are my vain gestures toward these ends.

(So a critical antihumanist, a hard determinist, and a resolute atheist who inexplicably clings to the notion of extropy, and believes, as a result, that we all live awful lives of being shat upon by the rich that should, notwithstanding, last forever)

For now, I host. Soon I hope to be hosted.

So far I am enthusiastic about this site and what it represents, although I do think that it's unfortunate, the number of people who try to use CS as a surprise dating service.

Should this endeavor fail, it'll be due to trust issues, which I see as being its Achilles' heel.

Most things are of some interest

I once won a staring contest with a wild, un-caged mountain lion. It stood 8 feet in front of me. I don't know why it didn't go for it, I was armed with a twig. Maybe, I thought, I have some greater purpose, one it could smell it on me. Perhaps, without ever being aware of it, I was in fact a force of nature, and as a result, my being was so inevitable that even a wild, man-sized cat could do no other than shrink before it. I felt touched by greatness.

Then I got a job. Some lady complained because her coffee was cold. I had a sit-down with two small men in big suits, both of them younger than me. One was balding, the other had an exceptionally pretty girlfriend who he couldn't stand. 'Bald' informed me that this was the third time this week. 'Pretty Girlfriend' said that if it happened again I'd be officially reprimanded.

A discursive richness is about the only wealth afforded by a philosophy education. So while the wine may be cheap, the conversation almost certainly will not be. I am fairly well rounded and can speak intelligently about a variety of subjects.