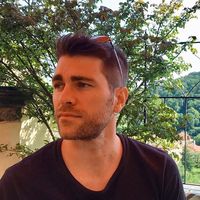 I'm a 36 years old French guy from Montpellier, now living in Paris after a long time in Prague. I like music (I play the guitar) and to discover new thing
I used to play in a rock music band, and now I try to form a new one. I'm curious and motivated in general, especially when it comes to music, travels, politics...

I know my personal life direction, but I don't know exactly the path. I just want it to be the most humanly fulfilling.

Couchsurfing allowed me to really enjoy cities and people in the past years, and now is the time to allow travellers to live nice moments in Paris.

Yes. First experience was a fully non-organized trip with a friend in Italie-Croatia. I met two italian couchsurfers really nice and it was a real good time! Then in Canada and United States, I enjoyed it a lot!

I had a licence to fly planes (but she's outdated now) but I still love everything which is related to airplane's world.
Everything about music in general.
I do love history and politics in general. I'm not an expert of course, but I'm an big fan somehow!

For music:
I do like many types of music but the two major ones are classical music and rock music. So during the same day I can listen to Mendelssohn, Saint-Saens, Tchaikovski, Dvorak or Vivaldi and afterwards listen to Pink Floyd, Led Zep, ACDC, Creedence, Scorpions, Supertramp, Pearl Jam, Steve Ray Vaughan, GNR....

For me it's amazing : I've seen whales and belougas while in Canada. And I met Presidents of the G20 nations, which was great (shook Obama's hand)!

And i've played a small role in a movie with Kristen Stewart and my part was a dialogue with her :-)

In this section, i will place myself as a student in approximatly everything. It's not that I'm completely ignorant, it's just I only know a little in many activities.
But I'm ready to discuss about music or play guitar with who wants. I can speak in english or german as a student or help in french (I'm patient as a teacher).

My love for intercultural matters. My small life experience... And for the rest, we'll improvise :-)